Ghost Fight!! is a game in which quirky humans battle each other using ghosts for no discernible reason in a turn based rpg format. To win, you must reduce the health of all of your opponent’s ghosts (also called spirits) to zero before they do so to you. To play, you must first select your shaman.

After selecting a single-player game, you will reach the Shaman Select Menu, where you, uh, select the shaman you would like to play as. Selection is done via the arrow keys and space bar. As of now there are seven choices, and more details about them can be found here. 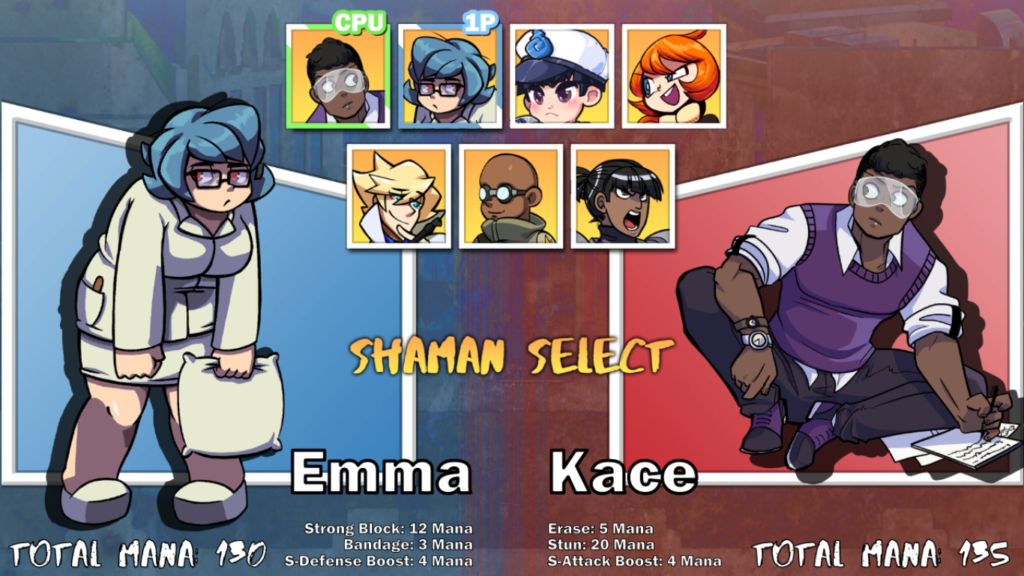 The attributes of a shaman (the things that make them differ from one another from a gameplay perspective) are as follows: Total Mana, Spells, and the Shaman Bonus. Two of these attributes are displayed on the Shaman Select page, namely Total Mana and Spells.

Total Mana is the amount of spiritual power your shaman character will start the battle with. Practically, Mana is used in selecting ghosts to battle with, to switch ghosts onto the field during battle, and to cast spells. Each ghost added to your team costs 25 Mana. Players have freedom to select the number of ghosts they wish to battle with (Total Mana permitting). Of course, a player must select at least one ghost for their team, and at this time no Shaman has enough Mana to select more than 6.

Spells are extra moves and abilities that can be used during battle, such as the spell Strong Block, which allows for a player’s ghost to become immune from attacks while still being able to attack themselves for one turn. Each spell has a unique Mana cost. Because of the powerful nature of spells, it may be strategically advantageous to have fewer ghosts on one’s team and instead save those Mana points for spell usage.

During battle, it also costs 1 Mana to switch the players current ghost on the field. If Mana is zero, obviously no switching or spells can be performed.

Shaman Bonuses, which are not listed on the Shaman select page, are simply small stat bonuses conferred to a Shaman’s ghosts. Emma, for instance, may offer a +5 HP bonus to all ghosts under her control. A full list of shamans with their bonuses, total mana, and spells can also be found here.

Once you are your opponent’s shamans have been selected, you move onto the Spirit (or ghost) Select Menu.

On the Spirit Select Menu you, uh, select your spirits. Each spirit chosen costs 25 Mana, and you must select at least one. As of now there are 9 spirit options, and more information about them can be found here. After selecting a spirit to add to your team, will be given an option in move sets. 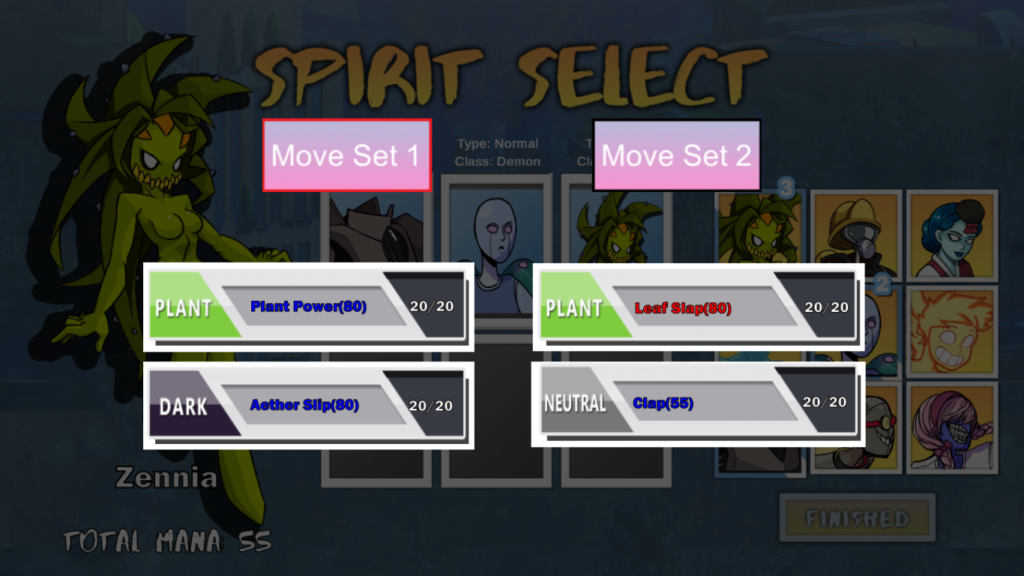 Each spirit will have 4 attack moves that it can use during battle. There are two sets of attack options that the player can choose from at this time. Which is preferable depends on player strategy.

Attack move buttons display their elemental type to the left. The name of the move and its attack power are in the center (attack power is the number in parenthesis). The number of times it can be used per battle is on the right.  If the attack name is displayed in blue, then it is a special attack using the special move stat. If in red, it is a physical attack using the physical move stat. More details on damage calculation can be found here.

Like shamans, spirits also have attributes. In the case of spirits, these are: Stats, type, ability, special, and attack moves. Stats are the numerical component used in calculating turn order, health, damage taken and dealt during combat. Type is the elemental alignment of a spirit, which impacts the damage dealt by and received from certain moves (the details of which are explained here). Abilities are special perks that each spirit has. The spirit Kevin, for instance, is immune to fire attacks. The Type and Class of a spirit can be viewed on the spirit select page. A comprehensive overview of all spirits and their attributes can again be found here.

Once you have selected the spirits you’d like to battle with and their move sets, just select “Finished” to move into the battle phase.

The battle screen displays a number of shaman and spirit attributes. Total number of spirits on each team as well as on field spirit health and Special Points (SP) can be viewed in the top corners. Remaining shaman Mana can be seen in the bottom corners.

Players select their actions via the arrow keys and space bar using the command wheel towards center screen. Here, players may select to attack with their spirits (FIGHT), cast a spell (SPELLS), change which spirit they current have on field (SWITCH), or resign (FORFEIT).

After casting a spell, other actions (attacking or switching) can often still be used ( though this varies from spell to spell, depending on the effect). A brief description of the spell effect is generally provided. The reverse is rarely true, selecting an attack or switching will almost always immediately conclude a player’s turn. As such, players should be sure to first cast a spell if they have interest in doing so.

Switching which spirit is currently on the field cost 1 Mana.  Spirit Stat information is also available on the Switch page.

One special point (SP) is given for each turn a spirit spends on the field, and another for every time a spirit successfully deals damage to an opposing spirit. Once a spirit has acquired 9 SP, they can perform their special move.

This can be selected via the S button to the left of the standard attack options. This button will be unselectable until enough special points have been acquired. The special move of each spirit is unique, and choosing to use it generally ends a player’s turn.

Players continue to attack, switch, and cast spells strategically until all of one player’s spirits have been defeated. Once a match is over, players are returned to the original gameplay mode selection menu.

And that is a summary of how to play Ghost Fight!! .

More detailed explanations of specific game mechanics and calculations can be found here.